The Madrid “Verbenas”: The Best Traditional Festivals in the City

When establishing which is the liveliest city in Spain, we simply must talk about the capital, Madrid, since it hosts all kinds of events, concerts and festivities 365 days a year.

However, if there is an outstanding type of celebration that attracts thousands of people of all ages every year, that would be its popular local festivals, the “verbenas”. These centuries-old holidays have smartly reinvented themselves to become trendier than ever in the new millennium.

That’s why today we’re travelling to the heart of Spain, in order to get an insider look at those local festivals⁠—neighbourhood parties that fuse authentic Spanish tradition and modernity, bringing in all the latest in-crowds. And with Local Tuk Tuk, you can be part of them.

The origins of these festivals go back centuries, to times where the feasts of the Patron Saints of each area were the only free days that the underprivileged classes could enjoy.

In those days, the tourist industry had not developed, nor did the concept of taking a “long weekend” exist, so the community took those “holy days” as a chance to enjoy the company of their friends and family. They organised themselves to put food and drinks out on the street and have dances, contests and exhibitions.

The name “verbena” comes from the vervain plant, which flowered abundantly in Madrid in mid-spring. The most widely accepted theory posits that youngsters in the city used to carry the flower to dance parties⁠—women on the bosom and men on the lapel of their jacket. Little by little, it became a tradition as the concept of “going to a dance” (“ir al baile”⁠) became a thing.

Local Tuk Tuk loves to show its customers all these curiosities and encourages them to enjoy Madrid’s “verbenas”. It’s well worth going to one at least once in your life. 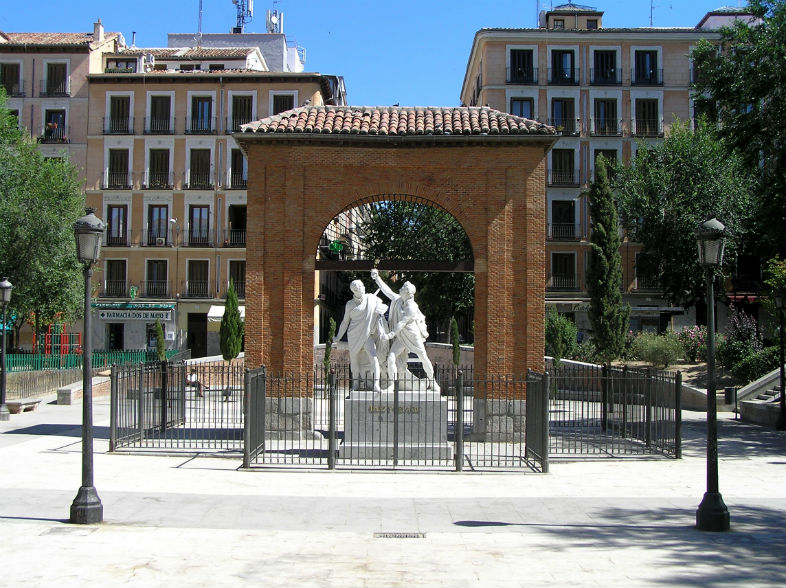 This bank holiday in the Autonomous Community of Madrid commemorates the 2nd of May Uprising of 1808 against the Napoleonic troops at the beginning of the Peninsular War. This festival takes place in the Malasaña area.

A wide range of events are always programmed for the Dos de Mayo festivities, from sculpture and painting workshops to multiple tabletop game tournaments.

All the locals from the Malasaña neighbourhood contribute something during the festival. Today the area continues to be full of life and the Dos de Mayo celebrations are probably the most popular in Madrid.

Some of the most important “verbenas” in Madrid take place on the 12th and 15th of May: the Verbenas de San Isidro in honour of St. Isidore, the city’s patron saint.

These parties spread through various parts of the city: the Plaza Mayor, the Plaza de la Villa, the Las Vistillas quarter and the Pradera de San Isidro park, and even to other diverse locations such as the area of Puerta del Ángel, the Temple of Debod, the Rose Garden of the Parque del Oeste or the Conde de Barajas park.

The programmes are full of activities for everyone: street markets, outdoor group activities, dances, concerts, etc.

If you’re visiting Madrid at this time, you will find yourself in a city that brings all its life to the streets. This is precisely the spirit of Madrid’s “verbenas”.

As for the hottest months in the capital, Local Tuk Tuk can also offer you a broad range of potential plans: Madrid’s summer festivals.

It takes place around the 5th-8th of August and is celebrated in the El Rastro and Embajadores areas. Plaza de Cascorro square is its epicentre, where you can attend a myriad of concerts and performances or head to the many eating areas, attractions and stands for all the family to enjoy.

The San Cayetano festivities may be over, but the fun doesn’t stop because along comes the San Lorenzo fair, which lasts until the 11th of August.

Even in a city as cosmopolitan as Madrid, this festival brings out the most traditional customs of the capital. It includes card tournaments, typical “chotis” dance contests, concerts, processions, games for children and all sorts of musical events every night.

This is also the ideal time for a summer diet break! Enjoy the time-honoured dishes of the city via street sampling of paella, tapas or the best chocolate with churros.

The last stop on our tour of enjoyment and leisure is at La Latina, the neighbourhood that hosts the Verbena de la Paloma summer festival.

It takes place in mid-August and there’s never a shortage of traditional “chulapa” and “chulapo” costumes filling the festival with colour and merriment. The main activities take place at the Plaza de la Paja, Plaza de la Cebada, Plaza de San Francisco and Plaza de la Puerta de Moros squares. The streets and buildings are all adorned and invite everyone to feel the vibe in the open air.

We can’t find a single reason why you wouldn’t want to let yourself be amazed by these festivals. If you’re touring the city during these dates, book a tuk tuk tour. You’ll definitely find out the most well-hidden and surprising secrets of this capital.

Previous postThere’s also Carnival with samba in Portugal!
Next post7 Things To Do in Madrid With Kids

We use cookies on our website to give you the most relevant experience by remembering your preferences and repeat visits. By clicking “Accept”, you consent to the use of ALL the cookies.
Do not sell my personal information.
Cookie SettingsAccept All
Manage consent